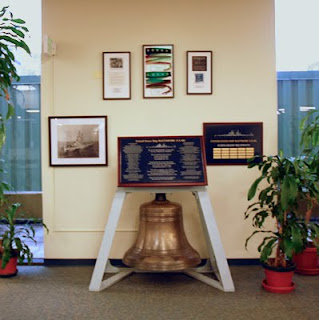 Langsdale is home to an installation and a number of Special Collections from military veterans and lineage organizations.
The permanent installation commemorating the service of the USS Baltimore (The Bell is Back, 11/16/2009), was enhanced by the addition of three panels donated by veterans of the ship and delivered by Capt. Christos Zirps, USN (Ret.) last month. (right)
The center panel includes commissioning pennants removed from the ship when it was decommissioned in 1946 and again in 1956. These were donated by John Rockenbaugh and Joseph Vida respectively. The pennants are flanked by panels commemorating an address by President Franklin D. Roosevelt, after his historic meeting with Gen Douglas McArthur and Adm. Chester Nimitz aboard the Baltimore in August 1944, and the ships memorial plaque in the Nimitz National Museum of the Pacific War.
When GAR General Order 11 set a national date for Decoration Day in 1868, it pledged that “If other eyes grow dull and other hinds slack, and other hearts cold in the solemn trust, ours shall keep it well as long as the light and warmth of life remain in us.” A decade later, in hopes that the memory of those lost in the Civil War would survive its veterans, the GAR began to organize “Sons of Veterans” among them the James A. Garfield Camp No. 1 in Baltimore.
This local unit of the Sons of Union Veterans of the Civil War (SOV) is among several local affiliates of military lineage societies which keep their records in Langsdale’s Special Collections. Others are the Society of the War of 1812 (SWE), the Sons of the American Revolution (SAR), and the Society of Colonial Wars (MDSCW). The General Society of Colonial Wars (GSCW), the national organization of descendents of men who served in “the establishment, defense, and preservation of the American Colonies” before independence, also maintains its archives here.