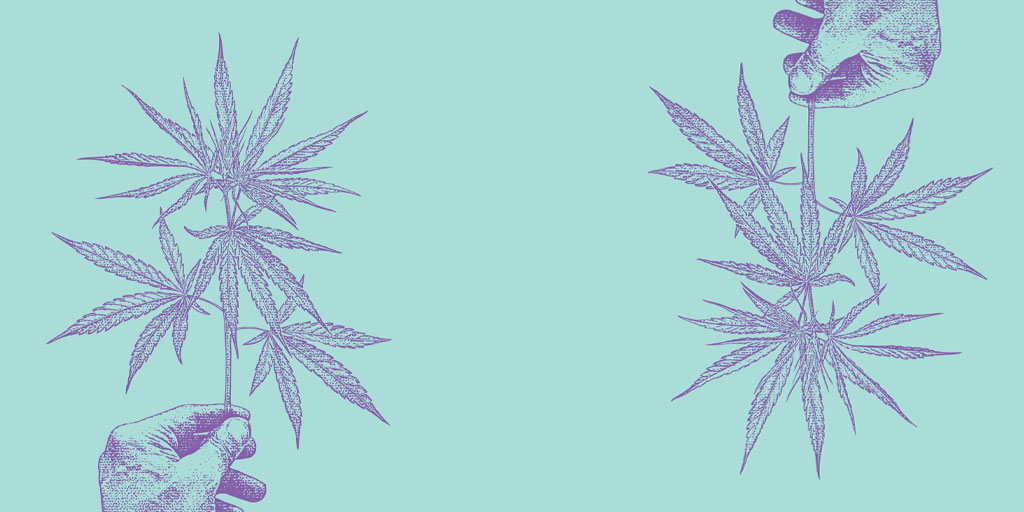 In the November midterm election, Marylanders voted to legalize recreational cannabis in the state. Starting in July 2023, Marylanders 21 and over will be able to legally possess up to 1.5 ounces of marijuana and grow two plants at home.

Maryland will join 20 other states (as of this writing) and the District of Columbia in having legalized recreational cannabis use. In her fight to see the referendum succeed, Alex Hughes, J.D. ’09,  made sure the ballot measure  wasn’t overshadowed by the top ticket races for governor, comptroller and the like. Hughes was co-manager, with former Ravens player Eugene Monroe, of the campaign “Yes on 4,” which leveraged social media and text marketing to encourage voter turnout in November.

Hughes explains that her passion for cannabis legalization goes back to the nearly 15 years she spent working on criminal justice policy and seeing firsthand the impacts that low-level drug charges can have on people’s lives.

“What we know is that legalizing cannabis frees up public-safety resources to focus on more violent crime,” says Hughes. “In states that have legalized, simple-possession arrests are down over 70 percent. We also know that there are people who need access to medical cannabis that can’t get easy access because of bureaucratic red tape. Passing Question 4 will help mitigate these problems.”

But the devilish details have yet to be dealt with, and much of that work would be punted into 2023. Identical House and Senate bills, HB 837 and SB 833, will now go into effect, though not until January 1, 2023, when the state will start regulatory wrangling in advance of the July deadline.

The collective bills outline the amount of cannabis that can be legally possessed, but they also detail fines for public smoking, call for the creation of a Cannabis Public Health Advisory Council, and provide for those previously convicted of cannabis-only possession to have their criminal records expunged.

‘AN OPPORTUNITY FOR REPARATIONS’

Importantly, the bills attempt to address social equity problems that have dogged the state’s medical cannabis rollout. A Community Reinvestment and Repair Fund would provide money to communities disproportionately impacted by cannabis prohibition, and a Cannabis Assistance Fund would help small, minority-owned, and women-owned businesses enter the adult-use cannabis industry.

State Sen. Jill P. Carter, J.D. ’93, a Democrat representing Baltimore City, has been outspoken in her calls for social justice and equity in the state’s legalization efforts. She points to research conducted in 2020 by the ACLU that indicates that 50 percent of the drug arrests in Maryland were for marijuana, and that Black people make up 92 percent of those arrested — even though numerous data sources report that Black people and white people use marijuana at the same rate.

“It is imperative that we legalize cannabis, ensure economic opportunities for individuals criminalized during prohibition, and reinvest in impacted communities,” Carter says. “Legalization creates an opportunity for reparations.”

The particulars of the law, however, have yet to be worked out. “The state is setting up a brand-new field, and I think they’ve done a pretty good job of addressing potential issues in a serious and thoughtful way,” says Alan Nemeth, adjunct professor at Baltimore Law. Nemeth developed and teaches the law school’s first course in marijuana law.

Still, Nemeth says, watching the regulatory piece unfold will be interesting. How, for example, will the Cannabis Assistance Fund decide who gets grant money, and how much? What impact will recreational legalization have on Maryland’s existing medical cannabis laws? And the practicalities of executing criminal record expungement — which means sorting through decades of paper files — could create a bureaucratic juggernaut.

“There will be automatic expungement for cannabis possession-only cases prior to July 2023, but how will jurisdictions make that happen? Will they set up cannabis courts to speed up resentencing efforts without bogging down the rest of the court system? Or they could set up a task force at the jurisdiction level,” says Nemeth. “Parsing all that out will take a while.”

Baltimore County State’s Attorney Scott Shellenberger, J.D. ’84, agrees that expungement is going to be both a Herculean task and one that, as of now, has not been worked out in the detail it deserves. Shellenberger, a Democrat, has heard both sides of the cannabis debate and says he will abide by whatever the voters decide. But he, too, has questions about what will happen in 2023.

“What remains unanswered are things like where it will be sold, and regulations for smoking in a car,” says Shellenberger. “If I’m driving and my friend is drinking a beer, I’m not drunk, but what if that friend is smoking cannabis in the car? Marijuana stays in the system longer [than alcohol]. What does that mean for impaired driving?”

Shellenberger notes that states with legal recreational cannabis have seen spikes in car accidents. Data from the Insurance Institute for Highway Safety showed a 6 percent increase in injury crash rates and a 4 percent increase in fatal crashes in California, Colorado, Nevada, Oregon and Washington immediately after their legalization, though whether cannabis alone played a pivotal factor is not clear from the reporting.

What is clear is that Maryland’s medical marijuana industry has disproportionately left out minorities from a business that cultivates as much as $500 million in profits a year. Shellenberger wonders what’s to stop that happening again.

These are issues Carter had hoped to avoid. In a March 2022 tweet she stated, “Legalizing cannabis without addressing the centuries of injustice committed against Black and brown communities concedes to exploitation and perpetuates systemic racism. Passing empty policy to secure an electoral victory will adversely impact the most vulnerable communities.”

Her now-defunct bill, SB692, named the Cannabis Legalization and Reparations for the War on Drugs Act, would have legalized recreational cannabis (up to four ounces) starting in July 2022. It also allocated 60 percent of revenue from legalized cannabis directly to impacted communities through the Community Reinvestment and Repair Fund. While the senator was able to amend the other two bills to include portions of this fund, both only allocate 30 percent of monies.

Now, many of Carter’s priorities have to wait until next year. “We made significant strides towards legalization last session, but still have much to accomplish,” Carter states in an email.

“People are going to smoke regardless of whether this referendum passes,” Carter says, ahead of the November election. “It is safer for both the consumer and the community if it’s legalized… It’s time we move away from antiquated ideas and embrace a 21st-century economy and justice system.”