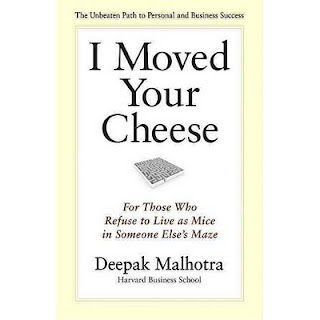 I cheated, I admit it, I cheated and read the second book first.
I had always been intrigued by the book with the title Who Moved My Cheese? This was at a time when a lot of changes were being made where I worked in the Circulation department here at Langsdale.
The book title intrigued me enough to the point of actually trying to read the book, but as I read a few pages into the simplified story of two mice trying to figure out why the cheese in the maze was located in different places, a.k.a. “change”, I was put off by the notion of it being a self-help book.
Then, not too long ago, a new book title caught my eye, and once again, it seemed to be timed to coincide with what I consider major changes in my work procedures. Now I am working in the Book and Document Delivery department, helping to deliver electronic reserves, mostly book chapters and journal articles, as part of courses across the spectrum of disciplines offered here at UB. After this semester the electronic reserves will be more easily accessed via your course SAKAI pages, instead of a separate delivery system.
The new book title that caught my eye was, I Moved Your Cheese.
The subtitle helps to better define it, For Those Who Refuse to Live as Mice in Someone Else’s Maze.
This time I shuffled off the pessimism I’d had experienced with the first “tale” of the mice in a maze. Honestly, I didn’t want to think about my job as a maze. I understand now that the maze is a given, yah maybe a little Zen –or “Zed” might be more appropriate, since one of the three mice in I Moved Your Cheese is named Zed and seems to take on a very Zen-like way of thinking. A great quote from the character Zed might be even more clarifying. After a young mouse asks the wise Yoda-like Zed if they should not pursue what makes them happy, Zed replies, “What I wish is not that you pursue happiness, but that you actually find happiness. Is it possible to pursue happiness if the pursuit itself does not make you happy?”
Later in the tale we learn of another mouse in the maze named Max. Max has actually gotten out of the maze with the help of a stronger, larger mouse named Big, more on Big later. Max tells Zed that there is more to life than the maze, but Zed already knows that, maybe not that there are these larger beings called people out there making the maze and moving the cheese, on purpose no less! But for Zed, the maze is not important so for him it only exists when he allows it too. He demonstrates this by moving within the maze by both walking the long passage-ways like everyone, or just by walking through walls.
Back to the mouse named Big, his complaint about the maze concerns the amount of other mice in his way within the walls, when it grows too much for him he uses his size and brawn to bust out through the walls of the maze.
And so all three featured mice find a way to break out of the maze, instead of just accepting change, they are making their own changes.
I’m not exactly sure how all this ties in with the changes in my work procedures, but it certainly helps to encourage ideas that are more creative than spending day in and day out creating Excel spreadsheets!