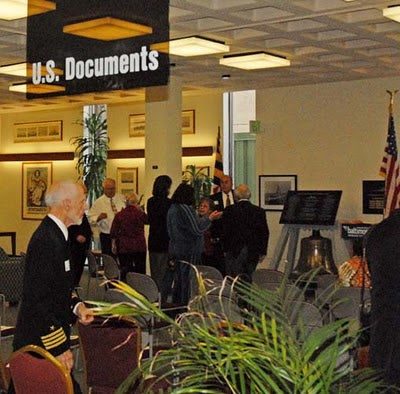 Ship’s Bell of U.S. Cruisers Maryland and Baltimore Returned to Library – Along with Scholarship

Over four years ago it was announced that “The great bronze bell that has stood at the center of the John and Frances Angelos Law Center lobby for the last 20 years was transferred to Langsdale Library’s main floor.” [Langsdale Link S 2005]

Two years later, however, the library was renovated and the ship’s bell, which had traveled the world in the naval service, was on the move again, though just across campus to a temporary location in Academic Center. It is now back in the library, the centerpiece of the U.S. Documents Reading Room on the second floor. Like the documents kept there, the bell is federal property, on deposit here. The U.S. Navy Historical Center first placed the bell, which had served the cruisers Maryland and Baltimore, at the university in 1981.

On the Saturday before Veterans Day, the bell was unveiled in its new location. The USS Baltimore Association raised money not only for a new stand and plaque, but also for a USS Baltimore Scholarship to be awarded for the first time in 2010. Leading these efforts and speaking at the ceremony were Roy R. Grundy, retired from the U.S. Naval Reserve; David Blomstrom, the last President of the USS Baltimore (CA-68) Association; and Capt. Christos Zirps, USN (Ret.) who oversaw installation of the bell and moderated the ceremony. All three men served aboard the Baltimore in the 1950’s. They credited Capt. John M. Backer, USNR (Ret.) of Baltimore for bringing the bell to the attention of the Association at what they had presumed to be their last reunion in Memphis, TN.

Displayed on the wall behind are items from the UB Print Collection associated with the naval service in the early twentieth century. A set of 24 naval prints depicts vessels of the “Great White Fleet”, sister ships of the cruiser Maryland. On the far left is one of a series of World War I recruiting posters in this collection.