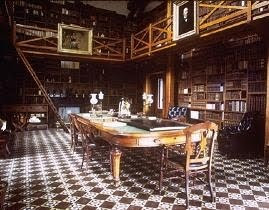 Happy President’s Day! It seems like a good day to look at America’s “Presidential Libraries”.

Perhaps the oldest is the collection of the second and sixth Presidents of the United States, John Adams and his son John Quincy Adams. The latter had requested in his will that a fireproof building be built for the library at Peacefield, the family estate now Adams National Historic Park. It was not until after the Civil War when his son, Ambassador Charles Francis Adams, returned to the family home that the stone library (Adams NHP photo- right) was finally built. The Ambassador’s son, Harvard History Prof. Henry Adams, used the collection of more than 10,000 volumes in writing his nine volume History of the United States of America, 1801-1817 becoming the first of many scholars to use a presidential library in their work. In 1916, the Rutherford B. Hayes Presidential Library at Spiegel Grove, became the first such library opened to outside researchers.

John Adam’s successor, Thomas Jefferson, famously sold his library to congress in 1815 to re-establish the congressional library burned by the British in the War of 1812. The Library of Congress (LOC) also holds the Presidential Papers of 23 of the first 30 Presidents, including some who now have home-town facilities called “Presidential Libraries”. The Abraham Lincoln Presidential Library, for instance, is a fine research library with materials on Illinois and the life and times of Lincoln. (It also houses a state of the art museum which, among other things, offers a program by a holographic archivist – one review quipped that the only problem with this program was that the hologram was more lifelike than any actual archivist the reviewer had ever encountered.) Lincoln’s presidential papers, however, are in the Library of Congress which offers Mr. Lincoln’s Virtual Library on-line. One can also find George Washington’s papers and many of Theodore Roosevelt’s papers through the LOC American Memory Project.

Unlike the Adams’ stone library, the more recent versions combine the functions of archives, library, museum, and sometimes mausoleum as well. (The three most recent presidential burials, those of Richard Nixon, Gerald Ford and Ronald Reagan, are on the grounds of their respective libraries.) The next generation of Presidential Libraries may be less monumental. Presidential Libraries will likely continue to be established to document the lives and times of each successive President of the United States.