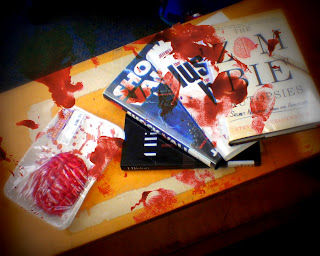 You may have heard rumors that Langsdale is haunted, and given the sinister offerings the library has in store this October, this may well be the case. Consider the display on the first floor in front of the Circulation desk, where a rotting zombie corpse decomposes beneath glass, his bony fingers clutching frightening and thematically appropriate gems from our DVD collection (available for checkout once you’ve pried Return of the Living Dead or Zombieland from his cold, dead hands.)

We also have some great new books that are in sync with the season: Shock Value: How a Few Eccentric Outsiders Gave Us Nightmares, Conquered Hollywood, and Invented Modern Horror by Jason Zinoman (PN 1995.9 .H6Z56 2011) chronicles the 1970s golden age of cinema and the significance of exploitation and horror films in shaping the era (the book dishes the dirt on such vaunted auteurs as John Carpenter, Brian DePalma, Wes Craven and Roman Polanski.)

Psychologist and Professor Jeffrey A Kottler’s book Lust for Blood (HM 1116 .K68 2011) explores the strange human fascination with violence, virtual and otherwise, in a variety of forms such as horror movies, news stories, chicken fights, video games, boxing, graphic novels, and the like. The Zombie Autopsies: Secret Notebooks from the Apocalypse (PS 3619.C435 Z66 2011) by Steven C. Schlozman, M.D. (really!) will make you queasy with its graphic illustrations of dissected reanimated corpses. Zombie Autopsies mimics the style of a clinical diary, but within its meticulous illustrations and faux-scientific observations beats the heart of a graphic novel that both science nerds and die-hard pulp enthusiasts can love.