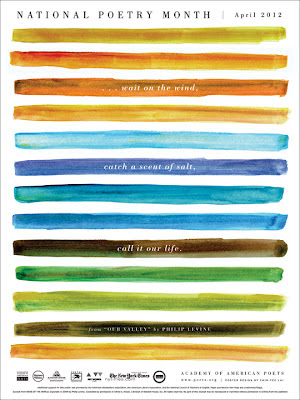 So April is almost over, which means that National Poetry Month is also on the wane. This holiday (of sorts) is celebrated primarily with readings and book fairs and maybe a brief appearance or two by a soft spoken poet on PBS’ The News Hour with Jim Leher. Some poets and literati might lament the fact that the national standing of the man (or woman) of letters is not what it used to be. Since Shakespeare, the prominence of poets in English and American pop culture has flat-lined. There is of course the rare anomaly here and there – a blip or two by Robert Frost in the 50’s, maybe a blip now and again when Maya Angelou steps into the spotlight – but for the most part, April is the only month that the general public is treated to an oh so rare dose of poesy. And, in my opinion, it’s all for the better.
There is no reason to hold the poet up to the same personal scrutiny and ephemeral, gushing accolades as we do a rock star or politician. Most poets have become poets because they enjoy the simple quiet of a small room. And they enjoy poetry for the strange transformation that a few, well-chosen words can have on the very walls of said room. Never have I heard a poet complain that they themselves are not getting enough attention, only, some may lament, that their work has suffered that fate.
And here we can insert National Poetry Month back into the conversation. For this month we are reminded that there are men and women striving, in their own solitude, to warp and wrap and change our language so that it may emerge more profound, more transcendent, more meaningful than when it was so humbly placed into so meek and frail a form as poetry. Joseph Brodskyonce said that “poetry is not the best words in the best order, but for language it is the highest form of existence.” And it attains that high form, at least in part, because of (though some would say ‘in spite of’) its frail and meek form. Poems are small and delicate things that can be carried around in the memory or folded up and stuck easily in the pocket.
Which brings us back around to one of the last events of National Poetry Month: this Thursday, April 26th is Poetry in your Pocket Day.  The idea behind this nationwide event is to encourage people to walk around with a poem close to them, for them to read it, think about it, talk about it… let the poem inform your day. Hearing this idea on NPR reminded me of a similar project that the poet and essayist Andrei Codrescu* gave to his poetry students at Louisiana State University. He assigned each student a Ghost-Companion, who, as he explained it in his book The Poetry Lesson, is “a poet, dead or alive . . . whose last name begins with the same letter as yours. This is a poet that you will study all semester, read deeply, understand well, google till you’re satisfied, and call on when you feel some difficulty. Any difficulty. Your Ghost-Companion will be a great and generous soul, who will come to your aid not just for your assignments, but also in other situations that neither you nor I can now imagine.”
To ask me to pick a favorite poet out of the many I have read over the years is an anxiety inducing experience, one similar to trying to rationalize the difference between a small and large infinity. My mind seizes and comes up with scarcely a sound, let alone a name. So, in order to pick a poet for this Thursday I have elected Codrescu’s method and picked Charles Simic as my Pocket Poet, as we both share a last initial. Here is one of his many small gems:

Green Buddhas
On the fruit stand.
We eat the smile
And spit out the teeth.

Let me know about your Ghost-Companion, and post your poem for Poetry in Your Pocket Day below.

*A poet who, by the way, got his start at Johns Hopkins and was a columnist for the Baltimore Sun as well as NPR. He has also been featured in UB’s literary magazine, Welter.