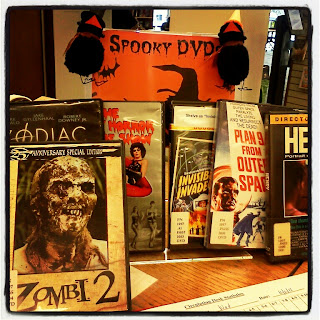 Langsdale has many top tier horror movies on hand that are ideal for setting the mood this Halloween—I’m looking at you, Rosemary’s Baby, Evil Dead II and Alien—but sometimes you need to be hit with something that amps up the intensity a notch. Luckily, the library has a selection of mercilessly frightening titles for even the most jaded of horror fans.

My favorite film of 2011 bar none (sorry, The Artist) was the high octane Korean shocker I Saw the Devil. I’ve never seen a revenge thriller so relentlessly horrifying—just when you think it can’t get any crazier, it astonishes the viewer with another bombshell development. I Saw the Devil is centered on the diabolical machinations of school bus driver and predatory serial killer Kyung-chul (Choi Min-sik ), who picks precisely the wrong victim when he abducts, (graphically) tortures, and murders the fiancée of secret service agent Soo-hyun (Lee Byung-hun). The devastated yet coolly resourceful Soo-hyun is hell-bent on revenge, and breaks protocol (which is frankly the least of his indiscretions) by using his secret agent smarts to hound Kyung-Chul as Kyung-Chul goes on a sickening rampage of rape and murder. Much cathartic mayhem ensues—the fact that Soo-hyun catches Kyung-Chul, beats the ever living snot out of him, and frees him just so the super-spiteful secret agent can have yet another excuse to administer a professional-grade ass whooping later on is completely absurd. Come to think of it, it also may not be the best law enforcement tactic. Still, watching this vile, remorseless psychopath get his ass handed to him repeatedly makes for an enthralling 141 minutes. You can also plumb a little deeper if you want to ponder the nature of evil or the futility of vigilantism and revenge, but even if you take I Saw the Devil on the most superficial level, the film definitely delivers.

A flick that ratchets up its scares in measures that equal its gross-out factor is Lucio Fulci’s 1978 sickie Zombie 2. If you’re not familiar with Fulci’s oeuvre, suffice to say he’s sort of a bargain-basement Dario Argento (who is probably the most renowned director of Italian giallo pictures; Argento’s visually arresting, highly stylized and ghastly films—such as 1977’s Suspiria—are classics of the horror genre.) Lucio’s Fulci’s late 1970s and early ‘80s imports usually featured stomach-turning gore and the terrible things you would least like to encounter in real life (sudden cobra appearances, ambulatory dead guys with maggots crawling all over their faces, and creepy children with blonde pageboy haircuts who speak in poorly dubbed English.) Zombie ( a.k.a. Zombi 2, thusly named because it was marketed worldwide as a pseudo-sequel to George Romero’s Dawn of the Dead) is extreme even by modern zombie film standards. The plot is simple: a woman and a reporter travel to a faraway island to investigate the mysterious disappearance of her scientist father. It seems the scientist was investigating an epidemic that—surprise!—turned all the island’s inhabitants into undead cannibals. The carnage in this movie is mind-bogglingly excessive, and the set pieces—like one in which a nude diver finds herself a third wheel during a nasty throw down between a deep-sea zombie and a great white shark—makes modern zombie epics like The Walking Dead (available at Langsdale in its original graphic novel form) seem about as intense as Mary Poppins.