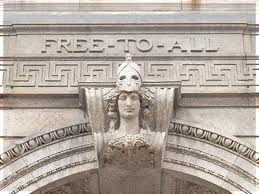 On Thursday, April 18, 2013 the Digital Public Library of America (DPLA) was launched without much fanfare. Actually, there was supposed to be much fanfare—at a public event at the Boston Public Library—but given the bombing that happened just outside the BPL a few days earlier, the event was postponed.

According to its website, “the DPLA brings together the riches of America’s libraries, archives, and museums, and makes them freely available to the world. It strives to contain the full breadth of human expression, from the written word, to works of art and culture, to records of America’s heritage, to the efforts and data of science.”

What makes this particularly exciting is that through the use of metadata these millions of items can be accessed and connected in new ways for the creation of new resources and new knowledge. And those conversant with programming can contribute by building applications or discovery tools.

DPLA is free, it’s online, it’s for everyone, and “it offers a single point of access to millions of items—photographs, manuscripts, books, sounds, moving images, and more—from libraries, archives, and museums around the United States.” So stop reading this blog and start exploring at DPLA!

One Reply to “Free to All”