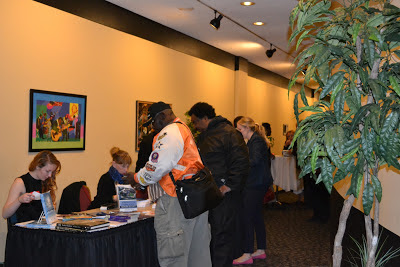 Taken from the current issue of the UB Post

Alumni authors from a range of disciplines gathered at Langsdale Library on April 4th  for a reception and panel discussion of their trade. The authors and various attendees came together to share experiences as writers, editors and publishers.

“They all come from different backgrounds,” said Natalie Burclaff, chair of the Langsdale Library marketing committee. The panelists included a poet, an author and publisher, a book and literary magazine publisher and a sociologist. “They all have really unique publishing experiences,” Burclaff said.

An event bringing together alumni authors was held in 2010, according to Burclaff, but there was less emphasis on community and discussion. Starting from scratch, she and the Langsdale staff worked with the Creative Writing and Publishing Arts graduate program and the Office of Alumni Relations to contact as many alumni authors as possible and invite them to the event. Burclaff said the committee spoke with more than 20 authors and 13 attended the April reception and panel. “I’m hoping we can build on that list of authors and be in constant contact,” she said.

Sharon Rick, ’05, said that she enjoyed seeing the writing community come together to share and perhaps inspire each other. “Being here makes me want to come back [for a master’s degree],” she said. “When I came out of school all I wanted to do was write, but it’s so important to be around other writers.”

The panel discussion focused on the different paths to publishing that University of Baltimore alumni have used as well as their current works.

The book came out of the 2010 stabbing death of Stephen Pitcairn, a young Johns Hopkins University researcher, in her neighborhood of Charles Village. Though she never knew Pitcairn, Brewer was asked to write a poem for his memorial and then continued to draw inspiration from Pitcairn’s life and family, including forming a friendship with his mother.

“I never set out to write this book,” Brewer said. “I’m sorry that I had to write it.”

Andrew Keating, M.F.A. ’12, is both a writer and a new publisher, having started the Cobalt Review literary journal—available in print and online—during the summer of 2011 and expanded with Cobalt Press, which will release its first book next year.

“You don’t just need to send yourself to the New Yorker,” Keating said of traditional notions of what it means to be “published.” Cobalt Review prints a limited number of hard copies, but thousands view content through the website. “I can consume literature in a completely different way because [the internet] makes that possible,” he said.

Even the way publishers, authors and readers interact has been shaped by the internet. Keating said that most of his time as a publisher is spent perusing Facebook. “Social media is where I find a lot of authors and a lot of readers,” he said.

Keating’s fellow panelist, Arnold Blumberg, M.A. ’96, D.C.D. ’04, is a more “traditional” publisher. A self-described “zombie expert,” Blumberg writes and contributes to science fiction compilations including Zombiemania: 80 Movies to Die For and teaches a class on zombies.

“We have a whole host of creatures in pop culture that represent our fears,” Blumberg said, explaining his fascination with the zombie genre. “The zombie is more modern.”

The zombie becomes a popular pop culture figure in times of war and financial hardship, and made its  most recent and enduring appearance following the September 11, 2001 terrorist attacks. What followed was the longest modern string of zombie media, according to Blumberg. “I would never have imagined that this one little subgenre would become as pervasive as it has,” he said, citing the popular television show “The Walking Dead” as a mainstream example.

Blumberg is also a co-founder of ATB Publishing, a small press focusing on pop culture and media-themed books. Outside In: 160 New Perspectives on 160 Classic Doctor Who Stories by 160 Writers, the first publication by ATB Publishing, was released in November 2012.

The panel also included Yoku Shaw-Taylor, M.A. ’90, a sociologist and author whose book Immigration, Assimilation, and Border Security investigates the push-pull between immigration and security, and the issues of cultural identity and profiling that result. Shaw-Taylor described the fragile atmosphere at an American border, where border security agents must keep traffic flowing while assessing in seconds whether someone is worthy of entering the country or should be detained. “If he can’t tell, he might stereotype you,” he said, emphasizing the small window of time border security has to ascertain someone’s immigration status. Part of assimilation, he said, is controlling the urge to stereotype, which is done unconsciously.

When asked if the “Melting Pot” ideal—that the United States is a blending of the cultures of its inhabitants to form a unique culture itself—still exists, Shaw-Taylor said: “It is the greatest immigration story ever told.”
“Immigration, Assimilation, and Border Security” is available from Government Institutes, an imprint of Rowman & Littlefield.

According to Burclaff, alumni authors who attended the event enjoyed it, particularly those who self-published or worked with small publishing houses who were given a chance to discuss their work and be recognized by the University of Baltimore community. The library hopes to have a reception and panel every two years as the alumni author community grows.

Books by members of the University of Baltimore community are available at the Barnes & Noble located in The Fitzgerald.