The good news kept rolling in on Wednesday, when the City Paper’s 2013 “Best of Baltimore” (BoB) issue hit the streets. Langsdale boasts a connection with not just one, but two BoB winners: sometime Circulation assistant Abdu Eaton (UB class of ’14)—known as Abdu Ali to followers of his local fashion blog, Eat On This, and to scenesters all over Baltimore —was named Best Renaissance Man by City Paper. We were pleased that Abdu’s flawless style and cultural savvy are getting well-deserved recognition, as well as his musical and party-promotion endeavors. Good work Abdu! 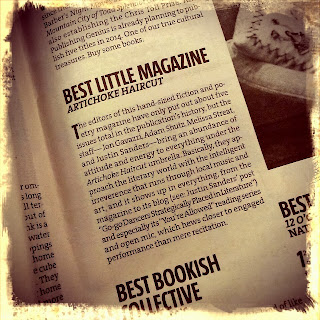 We’re also excited that Langsdale Administrative Assistant, Adam Shutz (UB class of ’11), was honored when the literary magazine he co-founded, Artichoke Haircut, won a BoB for Best Little Magazine. In addition to hosting monthly open-mic readings sponsored by Artichoke Haircut called “You’re Allowed” and publishing his own work, Adam pitches in as the journal’s poetry editor.

We asked Adam to put aside the blinding joy of receiving this honor and asked if he actually liked what City Paper had to say. Adam confirms, “I thought it was pretty accurate. They covered pretty much everything that we do—the reading series, the magazine and the blog—and they covered it in a way that captured the spirit of what we are going for. It was surprising. Out of all the articles and interviews and things that have been written about the magazine (and there haven’t been many) that was the closest to being true.” So, good going, City Paper.

After basking in post-award bliss, Shutz has a lot to look forward to: City Paper’s huge Best Of soiree is on Thursday night, the next “You’re Allowed” is scheduled for October 3rd, and it’s almost Adam’s birthday. Happy birthday and congratulations, Adam!