Skip to content
In 1956, 2” Quad became the first videotape format with commercial success. From that point until the late 1970s, this video format was used to record the vast majority of broadcast television. The playback equipment needed to view 2” Quad tape is extremely expensive to purchase and maintain which makes accessing the analog video signals recorded in this format very difficult. The only effective way to provide access to these unique moving images and recorded sounds is to digitize them. 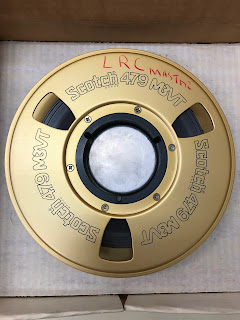 The Special Collections Department at the University of Baltimore’s Langsdale Library recently reformatted a part of the local Baltimore television collection, WMAR-TV Collection. The content was stored in its original inaccessible form of 2” Quadruplex open reel videotape (2” Quad), which is the most unstable video format.
Local television stations, such as Baltimore’s WMAR, are continuing to cover both regional and national news stories and events. TV came to Baltimore during the post-World War II bang. WMAR-TV was the first television station in Baltimore and one of the first TV stations in America, going on air on October 30, 1947. WMAR is one of the three major Baltimore television stations, which have survived, providing a significant historical video documentation of the region and nation from a Baltimore viewpoint. There are several mentions of national political figures in the 2” Quad from WMAR-TV, such as President Eisenhower, dating from 1965-1969, including “Eisenhower Obituary”, as well as Spiro Agnew, 55th Governor of Maryland and 39th Vice President of the United States who resigned after corruption charges. These tapes date from 1968 to 1973. There are several other notable topics in this collection including: the Preakness (1974), “1984 in Maryland: A Birthday Celebration”, and “Sights and Sounds Baltimore City Fair” (1983).
If you would like to find out more about what is available in our WMAR-TV Collection, you can browse the complete database here.
﻿