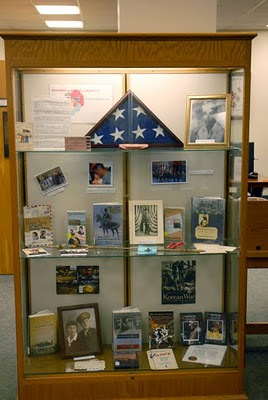 Langsdale will be closed next weekend in observance of the Memorial Day holiday. Though we are closing for these three days (Saturday through Monday), Langsdale has observed the holiday throughout this month. The display case on the first floor features photographs and memorabilia related to their relatives’ military service by the families of Langsdale staff members (right).
It is no accident that Memorial Day marks the beginning of summer. Originally known as Decoration Day, it is set at that time of the year when flowers are in bloom in all parts of the nation. After the Civil War, survivors began to gather at this time of year to decorate the graves of war dead with floral tributes.
The Grand Army of the Republic (GAR), the national organization of Union Veterans set a national date for the observance. “The 30th day of May, 1868, is designated for the purpose of strewing with flowers, or otherwise decorating the graves of comrades who died in defense of their country during the late rebellion, and whose bodies now lie in almost every city, village and hamlet churchyard in the land.”
After the Spanish American War and the Philippine Insurrection (1898-1902), veterans formed the Veterans of Foreign Service and the National Society of the Army of the Philippines which merged in 1914 to form the Veterans of Foreign Wars (VFW). After the United States entered World War I, the VFW inducted veterans of that and subsequent foreign wars. The VFW joined commemoration of those lost in foreign wars to the observances of Decoration Day which gradually became known as Memorial Day.
Langsdale is home to an installation by veterans of overseas service, as well as a number of Special Collections from military lineage organizations commemorating their forefathers’ service in the America of centuries past (Remembrances of Veterans, Sons of Veterans, at Langsdale).