The London 2012 Olympics are embracing the social web, especially Twitter. You can follow just about every athlete, team and news organization, along with a variety of Olympic Twitter feeds. Twitter is a social media platform that allows users to report current events in 140 characters or less.
In the United States, the International Olympic Committee licensed the Olympics content exclusively to NBC. Despite record-breaking viewership, NBC has been receiving a lot of criticism for its coverage. The Twitter hash tag #NBCfailhas been trending as more people turn to the Internet to voice their complaints. It first started with the opening ceremony, and continued with complaints about tape delays and spoilers by NBC’s own network.
The main issue is access to information. At a time when the Internet allows everyone to receive real-time information, how can information distributors like NBC balance the uncontrollable online updates with the six hour time difference between London and the United States (east coast)? Most of the medal competitions are tape delayed to appear during prime time, when most people would be watching.
The opening ceremonies were broadcasted at 7:30pm eastern. The tape delay wasn’t as much of an issue, but the fact that NBC edited the ceremony was, especially when NBC cut a part of the ceremony interpretedas a dedication to terrorist victims, and instead aired an interview between Ryan Seacrest and Michael Phelps. One vocal critic of NBC’s decisions is Jeff Jarvis, author of Public Parts and a transparency champion. He tweeted “the last reason for a channel on TV is curation. But if you don’t give me the best, why will I need you?” Jarvis’ point brings up the idea that if NBC is going to control the content, there should be some value added – although, the concept of what’s valuable is subjective. In this case, NBC can say (and has said) the value they added is tailoring the content to American audiences.
Not only was content left out, but a recording of the opening ceremonies in its entirety isn’t available online. In addition, live-streaming of the Olympics events is restricted to those who subscribe to cable: 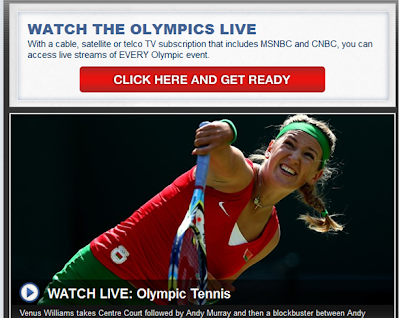 Shouldn’t this information be freely and readily available?
But this content isn’t owned by “the people” – it’s owned by the International Olympic Committee. You’ve maybe heard Stewart Brand’s quote, “Information wants to be free,” but he also said “information wants to be expensive, because it’s so valuable.” One article pointed out that streaming the content online isn’t financially prudent for NBC. A broadcast audience is worth much more to the network, and they’ve been showing up in millions. Until a financially sustainable model is developed for online content or the audience stops tuning in to broadcast television, the content is much more valuable to NBC through tape-delayed television.
Have you been following the Olympics? Do you watch the events during prime time or do you keep track in real time through websites and social media?
In 2016, the Olympics will be in Rio de Janeiro, which is only a one hour time difference from the east coast of the United States. This might remove some of the tape delay issues, but won’t remedy the access to live-streaming content – valuable information that networks won’t want to give away freely.