Skip to content
I was trying to think of a title for this blog entry that would grab readers attention, something shocking. But then I began to think of the recent events that include cannibalism, mass murders, and (shudder) worst of all, elections 2012, it seems rather difficult to come up with something shocking these days.
So what gives… who, what, and where did this lawyer/journalist get tortured? The who is Alexander Contee Hanson. The where is right here in Baltimore city. The what involves and angry mob, beatings and even the use of tar and feathers. The missing question here is, “When?”. That would be July 22, 1812, just a little over 200 years ago, and only 4 days after the beginning of the War of 1812.
This is one of many, many interesting discoveries I found with only a quick search of the terms War of 1812 and Baltimore. One location I discovered was right here above my own nose. The Special Collections Library at UB, under the direction of Tom Hollowak, is a treasure trove of material meant for the aspiring historian all the way to the most learned academic. For more info, visit the Society of the War of 1812 in the State of Maryland (SWE) resource page.
When I first discovered this incredible link to fascinating history, my first thought was, “I could lose my job,” meaning that I could very easily spend my day sorting through the various historical pages, collections, and artifacts in this collection. And what better time to explore this resource than as we commemorate the bicentennial of the War of 1812.
As we begin this school year our 1st floor display case features a large portion of the collection about the War of 1812 from our Special Collections Library. Including a replica of a 15 star American Flag, an insignia, possibly from a battle drum of the Washington Blues, 5th Regiment of Maryland, and a piece of wood labeled “Piece of tree under which General Ross was killed.” 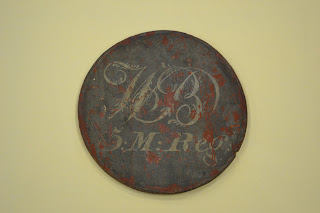 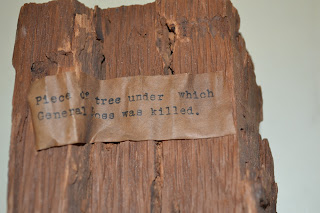 So what about that tar and feathered journalist/lawyer? Here is just a peak into that story, from Wikipedia:

Alexander Contee Hanson (February 27, 1786 – April 23, 1819) was an American lawyer, publisher, and statesman. He represented the third district of Maryland in the U.S. House, and the state of Maryland in the U.S. Senate.
Hanson, the grandson of John Hanson, was born in Annapolis, Maryland, and attended local private schools. He graduated from St. John’s College in Annapolis in 1802. He proceeded to study law, was admitted to the bar, and commenced practice in Annapolis. He served as a member of the Maryland House of Delegates from 1811 to 1815.
Hanson established and edited the Federal Republican, an extreme Federalist newspaper, in Baltimore. On June 22, 1812, four days after the beginning of the War of 1812, a mob that was irritated by his articles denouncing the administration[,] destroyed his office. [On] July 28, he reissued the paper from another building, where he was joined by a group of armed allies. When that building was besieged by a mob, Hanson and his group fired, killing two. On the morning of July 29, Hanson and his group surrendered to the militia and were escorted to jail. That evening, the mob stormed the jail, and Hanson was beaten and left for dead. Hanson moved the paper to Georgetown, Washington, D.C., where he published it unmolested. Hanson later moved to Rockville, Maryland.

One Reply to “Local Lawyer/Journalist Tortured!”