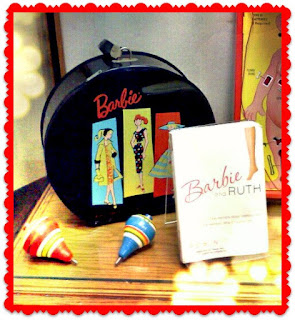 Feeling playful?  To dovetail our February case display theme—vintage toys—Langsdale has some particularly juicy reads in its collection about invention and the business of playthings. The books Barbie and Ruth by Robin Gerber, and Toy Monster by Jerry Oppenheimer are specifically about Mattel, Inc., the California-based powerhouse responsible for such iconic toys as the Barbie doll and Hot Wheels miniature cars.
Barbie and Ruth is a biography focusing on the life of Ruth Mosko Handler, who, along with her husband Elliott Handler, founded Mattel in the late 1940s. She is most famous worldwide for her creation of Barbie, a perennially popular fashion doll that debuted on the market in 1959. While Elliott Handler was a gifted artist, designer, and toy developer, business-savvy, hard-charging Ruth provided the impetus that got Mattel—the entire company, mind you, not just Barbie—off the ground. Mattel stepped into the toy biz at just the right time, as baby boomers became Mattel’s primary demographic, and children and their parents were clamoring for a never-ending supply of new and novel playthings. Eventually Ruth took a gamble on buying year-round advertising (unheard of at the time—previously, most toy advertising was confined to the holiday season only) on the Mickey Mouse Club, which debuted in 1955. Genius move: Mattel’s sales skyrocketed.
A few years later, despite a nearly unanimous chorus of (mostly male) colleagues and experts advising Handler against marketing the busty Barbie doll (most dolls on the market were baby dolls, encouraging girls in traditional wife-and-mother role-play), Ruth forged ahead with Barbie. She was convinced that the tiny “teen fashion model” reflected the aspirations of little girls everywhere, and that the doll provided a blank screen upon which they could project their fantasies of adulthood.
Gerber’s book doesn’t shy away from discussing the competitively-charged ruthlessness of the toy business and even of Ruth Handler herself, but Oppenheimer’s Toy Monstergoes one step further, pitting Handler against Barbie’s other alleged creator, eccentric engineer and inventor Jack Ryan, in a high-stakes game of corporate one-upmanship.  Ryan, the designer of the Sparrow and Hawk missiles for his former employer Raytheon, was hired by Mattel for his design savvy and facility with space-age materials. He retooled the German Bild-Lilli doll into Barbie (Bild-Lilli was the blueprint on which Barbie was based, which resulted in some litigation between the doll’s German makers and Mattel), made revolutionary talking mechanisms for dolls such as Chatty Cathy, and improved upon the designs of Mattel’s largest toy car competitor with the invention of the Hot Wheels line of miniature cars.  Mattel was so reliant on Ryan’s many patents that Ruth became uncomfortable with the power he wielded, as well as and the vast sums that Mattel had to pay him.  Eventually Handler found a way to make Ryan’s patents obsolete so that the company wouldn’t have to compensate him. Handler’s reign at Mattel ended in 1974, after she was charged with securities fraud and nearly bankrupted the company.
Both of these books are a fascinating glimpse into the inner workings of the toy biz. Even if you aren’t a fan of Barbie, it’s fun to read about the art and business of invention—particularly when the protagonists have a reputation for playing dirty.