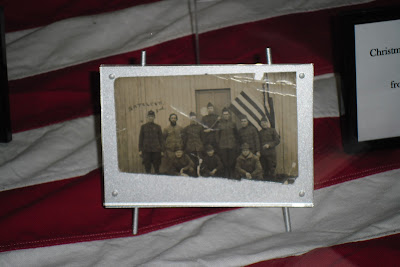 The Langsdale Library invites everyone to see authentic photographs from World War I. Staff member Brian Chetelat has shared items from his great-uncle Pat (Patrick Murphy) who served in the US Army from 1914-1919. He was exposed to gas in France and only lived into his early forties, dying from tuberculosis. Here is an account from my father, John D. Chetelat, Sr.’s, journal where he talks about his uncle Pat:

My Uncle Pat was another of my relatives about whom I have fond memories. As I said earlier, he lived with us from the time I was born until he went into the hospital in North Carolina. He had been drafted into the Army in the First World War. He was in his mid-twenties when he was drafted and had, by that time, become pretty independent. So much so that he was at odds with the military authorities on several occasions. The first time he got into trouble was when he was stationed at a camp in New Jersey waiting to be sent overseas. He went AWOL to come home to visit his sisters because he thought he might never see them again. Needless to say he was punished when he went back. He was smart and a good soldier when he wanted to be. He got several promotions while in France and was all the way up to a Sergeant First Class. Then he got into trouble again, (I never did know how or why) but anyway he got busted back to private. He was in the Army of Occupation in Germany until late 1919. He was sent home and discharged. He had gotten back up to corporal.

When he came back to the United States he came to live with my mother and father. He got a job working as a boilermaker for the Blaw-Knox Company. He worked there until he became too ill to work. He had been gassed once while in France and it started taking its toll when he came home. After he became too ill to work, he continued to live at our house. In those days the only treatment for tuberculosis was bed rest, clean air and proper food. There were no miracle drugs and many people died from the disease. There was no cure and patients with it could only look forward to death. You’ll never find that anymore. I believe we visited Uncle Pat in the summer of 1935 and he passed away in February 1937.