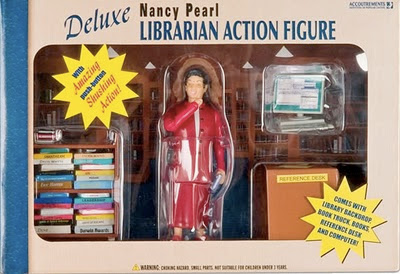 The holiday is almost here. You’re probably very relieved because this leaves lots of time to read and play with your Librarian Action Figure and maybe trade your Librarian Trading Card.

You don’t have a Librarian Action Figure?

You didn’t even know a Librarian Action Figure existed, except for Batgirl? You didn’t know Batgirl was a librarian? Well, I didn’t either until I got my first Librarian Action Figure, Nancy Pearl. From reading, yes reading, the back of the box, I learned that Batgirl was a librarian, too. She had her doctorate in library science and was the head of the Gotham City Public Library in the 1960s Batman series. O.K., so you’ve heard of Batgirl.

But who is Nancy Pearl? Nancy Pearl is a regular commentator on NPR and she has also served as Director of Library Programming and the Washington Center for the Book at the Seattle Public Library. She is apparently best known for the project “If All Seattle Read the Same Book” which was the inspiration for a similar project in Maryland (One Maryland, One Book, which Langsdale was a part) and around the country. Nancy Pearl has reviewed books for PBS Morning Edition, The Seattle Times, Library Journal, Booklist, and more. In addition to reviewing books, Pearl has written several, as well.

Also on Pearl’s amazingly long list of library- and book-related accomplishments are the awards she’s won. These include the 2005 Phenomenal Woman Award by the Women’s Endowment Foundation, 2004 Women’s National Book Association Award, and a Media and Communications Award in 2004 from the Ontario Canada Library Association, to name just a few.

In other words, Nancy Pearl has seen a lot of action. No wonder an action figure was created to look just like her. No wonder I bought one.

But it seems like my Librarian Action Figure got a little too much action.

Her right arm, the one that did the shushing, suddenly fell off, one day. I was saddened and attempted to fix her several times, but eventually I realized it was time to retire that proud shushing arm. I wandered around looking for another Librarian Action Figure to take over, no easy task, I might add. It felt like I was searching for eons, but finally I saw one for sale in Something Else, a funky little eclectic and artisticly inclined shop in Mount Washington. But ironically, as fate would have it, that week, I needed all my extra money for the Langsdale Library Book Sale, so I stared at the Library Action Figure longingly from afar, noting that this particular version came with a computer, a desk, and most covetous of all, a stack of mini science fiction books, including a couple of my favorites, The Martian Chronicles and A Scanner Darkly. But since I needed the real thing, books that is, and big fat ones at that, I saved my money for the book sale. When I returned, later, for the Library Action Figure, she was gone.

My bookshelf stood empty, except for books of course, for many months. It was a dry spell in the land of Library Action Figures, for me. But I withstood it, trying to distract myself with that ever reliable activity of book reading. And it wasn’t so bad, as long as I was in the middle of a chapter, which I usually was. And then one day, lo and behold, holiday time rolled around. Things were starting to look up. Woodsmoke and cinnamon were in the air. Snow was falling. Bells were jingling. Potato pancakes were frying. All that good stuff. And then, on top of all that, I got a present. The gift I’d been waiting for all those months – another Librarian Action Figure, from a library colleague who somehow knew just what I wanted. And this Librarian Action Figure came with mini science fiction books, to boot.

I have yet to take my new Librarian Action Figure out of her case, despite the many months that have passed. She’s wrapped up in plastic, safely shushing, on top of my desk. Her right arm rests securely on a little plastic shelf. No danger of overuse there. No repetitive stress syndrome for this Library Action Figure. She will be keeping her shushing arm handy. The only troubling fact is that some of the minibooks in the box are facing the other way and I can’t see what they say. I’m a little curious. I may have to open the box. One of those little minibooks could be a Batgirl comic. And besides, another holiday is on the way. Without my Librarian Action Figure, what will I play?