“Not incredibly scary” or even “not scary at all” is probably how many would describe the features that make up Special Collections’ October exhibit “Scares in Special Collections.”  Honestly, if you want to be scared or unsettled or irked, there is no shortage of archival caches at Langsdale to sift through–  you can find out about discrimination (ACLU of Maryland for one, and many, many others), challenges to reproductive freedom (Planned Parenthood of Maryland Collection), LGBTQ-bashing, injustice, and the AIDS crisis (The GLCCB collection), or deadly workplace hazards and unfair labor practices (The White Lung Association collection). But since October is one of the most lovely months on the calendar, I thought I’d keep it light. You can view the display in the hallway on the 2nd Floor of Learning Commons, but let me post a few images here for your seasonal amusement. 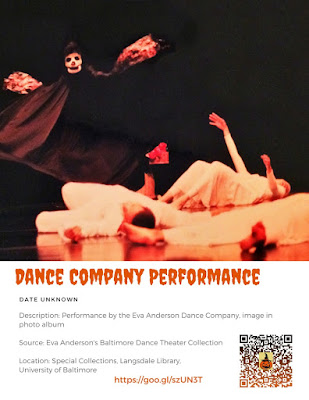 Did you know the University of Baltimore has an art collection? It does. It’s actually owned by the University of Baltimore Foundation. The woodblock print above appears to depict an illustration of Edgar Allan Poe’s poem “The Raven“. Can you read the artist’s signature in the bottom right? I cannot. Anyway, good work, Mystery Artist!
One of the department’s recent acquisitions is the Eva Anderson Baltimore Dance Theater collection. You can see some of the grace and beauty that were the trademarks of Eva Anderson’s choreography in this candid snapshot of a macabre performance, taken from one of Ms. Anderson’s many scrapbooks.
One good go-to to find seasonal ephemera in Special Collections is always The Samuel Ready School papers, because the Samuel Ready School– originally an orphanage– kept numerous programs and photos from many parties and pageants held there, which tended to celebrate holidays and the like. These particular images were taken from records that dated from 1950 and 1975, respectively. Not shown are the inappropriate and insensitive costumes children donned in the late 1940s and ’50s, an interesting footnote that gives researchers an idea about the culture of the pre-Civil Rights era.
I discovered that Langsdale is the steward to a handful of digitized papers originally belonging to pre-code Hollywood screenwriter John V. A. Weaver. Weaver was not from Baltimore, and even the collection note doesn’t explain how we procured these items. Weaver’s papers consist of–among other things– a typewritten play, a signed poem written on Paramount Studios stationery (perhaps written to his wife Peggy Wood, who won an Oscar for her portrayal of Reverend Mother in The Sound of Music), a treatment for a screenplay, and a story called Beyond Death (see photo). You can see from Weaver’s notes that he was having trouble making up his mind what to call it– alternate titles included “The Living Dead”, “Dead or Alive”, and “Officially Dead”. I don’t know what this play is about, all these monikers make it sound pretty creepy.
If you would like to see any of these terrifying items in person, or just want to enrich your studies with amazing research materials and primary sources, email us or make an appointment. Happy autumn!